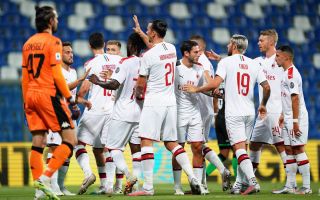 Continuity will be the operative word for AC Milan as they head into an exciting 2021-22 season, with Stefano Pioli looking to build around his core group.

As MilanNews writes, Milan – through a rollercoaster season with plenty of ups and downs – have managed to identify the fundamental vertebrae on which to build the present and the future of the club, and the players who will provide even more solidity for the next campaign.

The value of the group and the whole squad cannot be understated of course, but Pioli has established his immovables ahead of 2021-22: Theo Hernandez, Fikayo Tomori, Simon Kjaer, Davide Calabria, Franck Kessie, Ante Rebic, Zlatan Ibrahimovic plus the newcomer Mike Maignan who will replace Gianluigi Donnarumma.

Being able to count on eight reliable and highly talented players is a great advantage for Milan, who believe in these players not only for the qualities expressed but also for the great character shown. Calhanoglu, if he were to renew, is the ninth potential Rossoneri vertebra.

Despite this, the squad will need to be strengthened not only in quantity but above all in quality and that is why Paolo Maldini and Ricky Massara are on the lookout for young, talented players ready to make an impact along with technical and temperamental experience to increase the strength of the group. In addition to relying on their untouchables, Milan want to find new irreplaceable players.