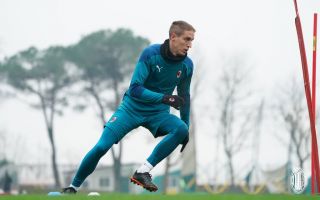 MN: Pioli launches Milan’s ‘B team’ – the search for answers in view of the January window

AC Milan head into their final game of the Europa League group with qualification not at stake, and that allows Stefano Pioli to make some selection choices.

According to MilanNews, on Thursday night against Sparta Praha the defensive department will be the most rotated, with Matteo Gabbia and Diogo Dalot accompanied by Andrea Conti and Leo Duarte, the latter two having not made a start this season.

If they were to put in good performances – which is difficult given their long absences – Pioli would know that he has some more solutions between now and January, when the situation in the department could change again. It is likely that in addition to a centre-back, a left-back could also arrive, which would lead to some inevitable sales.

In the summer, Milan decided not to invest in a deputy to Zlatan Ibrahimovic, instead opting to rely on the duo of Leao and Rebic plus the young Lorenzo Colombo.

In Prague, Colombo will be the centre-forward supported by Samu Castillejo, Brahim Diaz and Jens Petter Hauge. It provides a good chance for them to show off in view of the hectic pre-Christmas schedule.

In January, Milan could get enticed and in any case look for a more ready striker, but this eventuality should not be seen as the management deciding Colombo is not good enough.