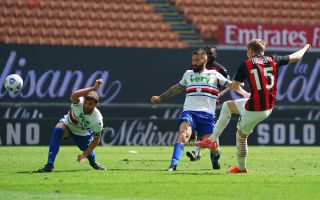 MN: Pioli’s faith in Hauge repaid – his commitment and attitude is undeniable

One of the few positives from today’s draw against Sampdoria at San Siro was seeing Jens Petter Hauge’s name on the scoresheet once again.

As MilanNews writes, the young Norwegian showed great character and a strong will to redeem himself from some difficult weeks during which he has not been at his best and has seen his playing time decrease.

It does not help that sections of the fan base have been too quick to judge some of Milan’s young players – not just Hauge – as hasty assessment and the label of ‘flop’ means that patience is an ever-decreasing virtue. Despite the doubts raised in recent months, trust in Hauge has always been present at Milanello as the player has always worked with great commitment and with the right attitude.

We saw this from the moment he took the field against Sampdoria as Hauge not only scored the equaliser but was among the most dangerous players in a game where the team really struggled to get going.

The trust was granted by Pioli and was repaid by Hauge on the pitch, and hopefully this is proof that the former Bodo/Glimt man could have a big impact in the final nine games.