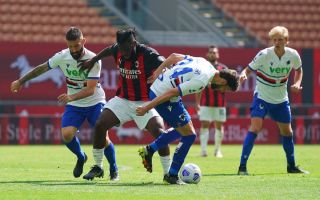 MN: Pioli’s gamble backfires – the changes are positive, but the psychophysical decline is a worry

AC Milan were unable to secure a much-needed three points as they were held to a 1-1 draw by Sampdoria on Sunday afternoon.

A mistake from Theo Hernandez gifted the opening goal to Fabio Quagliarella as the veteran striker lobbed the ball over Gianluigi Donnarumma, and despite the fact they went down to 10 men just after the goal it took a Jens Petter Hauge equaliser in the 87th minute to earn a point. The race for the Champions League remains more open than ever and the points dropped at San Siro is becoming a worry.

As MilanNews writes, Stefano Pioli made the decision to start Saelemaekers at right-back for the first time since his arrival (a position he knows well and has occupied as a substitute before) in an attempt to overload Sampdoria’s 4-4-2 down the right side. However, the Saelemaekers-Castillejo never got going and Ranieri had the bright young talent Damsgaard on the left wing, who continually caused problems.

Pioli admitted defeat in his experiment at half-time and brought on Pierre Kalulu, who found himself constantly involved in the attacking phase to support the build-up, even if his end product with regards to crossing was

The report adds how Ismael Bennacer appeared tired and did not put in a performance anything like the one he did as a substitute in Florence, maybe because of his commitments with Algeria. The choice to field Krunic was perhaps motivated by the possibility of bringing on Ante Rebic to blow the game open, presuming he wasn’t fit enough to start, but the problem is that the Bosnian did next to nothing on the wing in his 60 minutes. When Tonali and Rebic came on, we saw more energy and urgency.

The psychophysical condition of Milan is beginning to become a worry and the home form is suffering, making the fight for the Champions League intense once again.