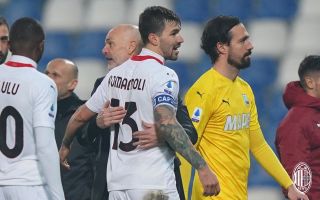 AC Milan continue to score goals but most importantly they also persist with being very difficult to predict.

With so many key players missing for the trip to face Sassuolo on Sunday like Zlatan Ibrahimovic, Simon Kjaer, Matteo Gabbia, Ismael Bennacer and Ante Rebic, many were predicting an in-form Neroverdi side to finally end the Rossoneri’s long unbeaten run.

Confident punters might have even had a bet on the prospect using a sign-up offer, but Milan again put their struggles to one side to prevail 2-1 thanks to goals from Rafael Leao and Alexis Saelemaekers.

As MilanNews reports, the Rossoneri have scored two or more goals per game in each of their last 15 league games, beating the Grande Torino record (still at 13). Just a year ago, one of the biggest problems facing the days of work at Milanello was the poor goal scoring, yet today it seems so natural that it doesn’t even make the news anymore.

Scoring with this consistency means that the team works well and follows the coach’s orders with pleasure, as well as the fact that every element of the group is always ready to give a little something extra to lend a hand to their team-mates.

Pioli continues to dismantle all criticisms aimed at his Milan, with the latest one being an addition to Zlatan Ibrahimovic. The Swede entered the group with the right attitude, managing to make a difference at Milanello as well as on the field in games, and he has netted 10 times in six league games.

However his body has – for the time being – told him to rest, and many thought that the goals in such a young team without a natural centre-forward to step in would dry up. Far from it.

With Rebic still not adapting the role of striker well and Leao still not at his best from a physical point of view, the goals came from midfielders and defenders, but then things seemed to unlock.

Pioli himself spoke of his choices after the Sassuolo game: “Today we almost wanted to play without a centre-forward, with Diaz and Calha between the lines without giving references. Strong teams know how to adapt to characteristics of those who take the field without losing identity and characteristics.”

Milan have changed their way of attacking in a clear way compared to when they can rely on Ibra, with far fewer long balls from the defence and from the full-backs and instead lots of sharp passing moves on the ground to utilise the speed, movement, awareness and intelligence of the forward group.

The game focused on the flanks by exploiting the ability of the wingers and Leao in one-on-one situations, with the central players entering the spaces created by their team-mates. The search for depth was evident, as was the desire to never give the ball away.