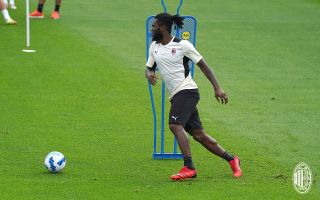 Some interesting updates have arrived regarding the future of Franck Kessie as the renewal saga continues to swirl on.

According to Anto Vitiello‘s latest YouTube video, Kessie does not carry the demeanour of a player who is under a lot of public scrutiny at the moment. In fact, the midfielder looks calm and happy at Milanello and the rumours that surround his contract situation have certainly not impacted his levels during training, which is a positive sign.

He adds that the will of Kessie is to stay at Milan despite the speculation that the likes of PSG, Spurs, Chelsea and Liverpool are interested. His agent George Atangana is trying to get more out of Milan as he wants €7m net per season plus €1.5m in bonuses and commissions for him too.

Milan have not raised their offer which is €6m net per season plus bonuses and a four-year extension (therefore until 2026). The statements that Kessié made during the Olympics could be a sign and in the next few days there will be more meetings with Atangana to discuss the situation.