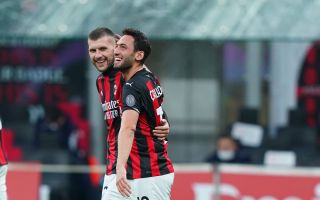 MN: Probable Milan XI for derby vs. Inter – first choice back four and a doubt resolved

AC Milan will have their most important and arguably toughest game of the season today as they face Inter in the Derby della Madonnina at San Siro.

The Rossoneri will be looking to reclaim top spot from their city rivals after they surrendered it for the first time last weekend, losing to Spezia while the Nerazzurri beat Lazio.

According to MilanNews, the absentees for Stefano Pioli to deal with will be Ismael Bennacer and Mario Mandzukic as both have muscle problems that they sustained during Thursday night’s draw in Belgrade against Red Star.

Gianluigi Donnarumma will have the centre-back pairing of Simon Kjaer and Alessio Romagnoli ahead of him, with Davide Calabria the right-back and Theo Hernandez the left-back in what appears to be Pioli’s first choice back four.

Due to Bennacer’s injury, Stefano Pioli will field the double pivot of Sandro Tonali and Franck Kessie. Behind the centre-forward Zlatan Ibrahimovic will be Ante Rebic on the left, Hakan Calhanoglu in the middle and Alexis Saelemakers on the right. Leao – unlike the last league derby – will start on the bench.