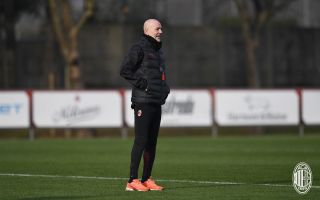 AC Milan get their 2022 underway on Thursday night when they welcome Roma to the San Siro, with Stefano Pioli hoping to record a league double over Jose Mourinho.

According to what is being reported by MilanNews, the team news is beginning to filter from the Rossoneri camp as to the probable choices that Pioli will make, starting with the back line which should see Mike Maignan in goal then a defence formed of Alessandro Florenzi, Fikayo Tomori, Alessio Romagnoli and Theo Hernandez.

With Ismael Bennacer and Franck Kessie at AFCON, the midfield double pivot is likely to be Sandro Tonali and Tiemoue Bakayoko, and ahead of them the trident should be Alexis Saelemaekers, Brahim Diaz and Rafael Leao in support of the centre-forward Zlatan Ibrahimovic.

Of course, Pioli should also have Ante Rebic and Davide Calabria at his disposal if needed, but both have been out for a while and therefore may not be ready to start.