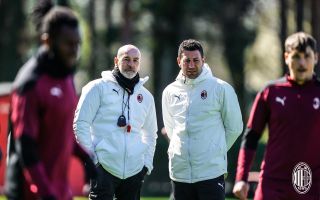 According to the latest from MilanNews, Pioli will recover two fundamental players in Ibrahimovic and Bennacer, even if they do not have ninety minutes in their legs. However, four players are at risk of missing the game – Leao, Romagnoli, Calabria and Rebic – for whom the training tomorrow morning will be fundamental.

The report adds how captain Romagnoli will not start even if he is fit, so Fikayo Tomori will partner Simon Kjaer in the heart of the defence in front of Gianluigi Donnarumma, with Theo Hernandez on the left and Diogo Dalot on the right unless Calabria makes a rapid recovery.

In midfield Pioli will use Kessie again and at his side there will be one of Tonali or Meite, with the Frenchman seemingly ahead of Tonali at the moment. Bennacer will start from the bench ready to take over from the game in progress.

The trident should be Saelemaekers, Calhanoglu and Krunic from right to left, while the centre-forward department remains in doubt. If Rebic and/or Leao are able to recover then they would start up front, with Ibra ready to take over in the second half. Otherwise, the Swede will grit his teeth and start from the beginning.