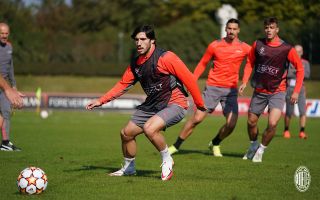 AC Milan’s team for tomorrow night’s game against Porto seems to now be in place, with some changes expected from the win over Hellas Verona.

According to MilanNews, there are a number of safe bets for who will be in the line-up as Olivier Giroud will be the striker with Rafa Leao on the left wing with Ante Rebic injury and Alexis Saelemaekers on the right side. The number 10 will either be Daniel Maldini or Rade Krunic, but to date the Bosnian seems to be the favourite. Ibrahimovic will start from the bench.

Sandro Tonali and Ismael Bennacer will be the double pivot given Franck Kessie’s suspension while Bakayoko will be back available on the bench. Ciprian Tatarusanu will be in goal with a centre-back pairing of Fikayo Tomori and Simon Kjaer ahead of him. Pierre Kalulu will be the right-back and Davide Calabria on the left as Ballo-Toure returns to being a substitute.