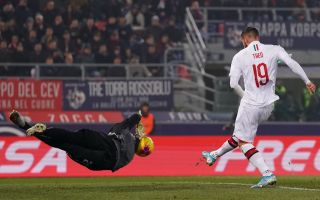 AC Milan will welcome back two key members of the starting XI for Monday night’s trip south to face Lecce, a report claims.

The Rossoneri will get their 2019-20 Serie A campaign back underway after an over three month absence as they battle a side fighting relegation at the Stadio Via del Mare, and you can read our match preview here.

According to MilanNews, Milan boss Stefano Pioli will throw Theo Hernandez straight into the starting line-up after he missed the Coppa Italia exit to Juventus through suspension.

His dynamism, tenacity and attacking prowess was sorely missed in Turin, and he will be on the left of a back four which will stay with Alessio Romagnoli and Simon Kjaer as the centre-backs and Andrea Conti at right-back.

Bennacer and Kessiè will occupy the holding midfield roles after both impressed against Juve, and it will be another important game for the Ivorian to show he should be part of the clubs long-term plans.

Ante Rebic will lead the line despite his red card at the Allianz Stadium, with Samu Castillejo back from suspension to flank him on the right alongside Bonaventura (CAM) and Calhanoglu (LM).