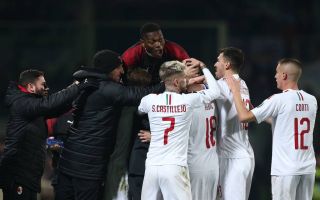 The forward department is one of the great mysteries that the Milan management must solve heading into the summer and into next season.

As MilanNews writes, Zlatan Ibrahimovic is moving towards saying goodbye to the Rossoneri for the last time, a decision influenced by the fact Ralf Rangnick is likely to be entrusted with a new youth-led project.

There is always a small doubt linked to the unpredictability of the Swede, but it will necessary to think in depth about the future of the attack should he leave.

The role of Rafael Leao will become even larger, as it is almost unthinkable that the Diavolo decide to sell him after just a year. The former Lille man has amassed just 10 starts and two goals, and while his potential is beyond doubt, it would be irresponsible to place too much responsibility on the 20-year-old.

The only “certainty” of Milan’s attacking department seems to be Ante Rebic, which is ironic for two reasons: the first being that he is only on loan until 2021, and the second being how badly he struggled until Christmas.

However, with Rangnick Rebic will maintain a leading role, even if Milan will have to start talking to Eintracht Frankfurt about signing him permanently before his loan runs out.

Meanwhile, Samu Castillejo relaunched himself after the farewell of Suso in January. The former Villareal wide man is a valuable player on the wing, but his offensive contribution is much lower than that of Rebic. For this reason it is difficult to consider Castillejo as untouchable.

Without Ibra and with only Rebic as a goal threat, it is clear that the Milan attack will have to grow both in numbers and in quality. The purchase of a centre-forward compatible with Rangnick’s style of football is inevitable: speed, aggression and constant movement without the ball.

Luka Jovic’s name has been mentioned but the Serbian – in addition to a disastrous year – suffered a serious heel injury that will keep him out for two to three months.

Jovic would not be enough though, and the report concludes by claiming that Milan would need another deadly striker to offer some variety and goalscoring guarantees to help fix an attack which struggled hugely until Ibra’s arrival.