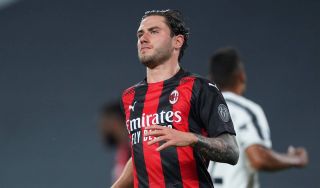 MN: Renewal in the works for Calabria as Milan are delighted with his season

Davide Calabria impressed everyone with his performances on the pitch this past season, bouncing back from a tough period. Now, Milan are ready to renew his contract and make him a symbol of the team.

The right-back came through the Rossoneri’s youth ranks and is thus an important player for Milan, eager to remain unlike Gigio Donnarumma. In the final months of the season, Calabria even played with pain as he decided to postpone a hernia operation.

He has done it now and will be out for around six weeks, but before he returns to Milanello, his renewal will be discussed. According to MilanNews, Milan are keen on renewing the contract which will expire in 2021.

There will certainly be a pay rise involved and contacts with his agents are expected in the coming days. There shouldn’t be any problems in the negotiations and Calabria is ready to attach himself to the club even more.