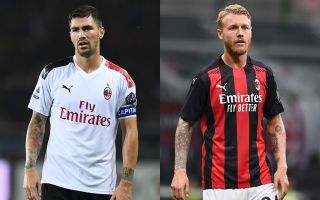 MN: Romagnoli, Kjaer duo back in action after 88 days – the captain faces big test vs. Inter

The Milan derby is just one day away, with the Rossoneri hoping to continue their 19-game unbeaten streak with a win. The incentive, after losing four consecutive league derbies, is to win the city back.

Stefano Pioli will have to do without Ante Rebic, who is struggling with a dislocated elbow, but Zlatan Ibrahimovic and Alessio Romagnoli are back at his disposal. The Rossoneri captain has been missing July 21, sustaining an injury against Sassuolo.

That game was very important for Pioli, as it was confirmed that he would be staying after the final whistle. The Ralf Rangnick hypothesis, therefore, was shut down and this shows just how much has changed. Tomorrow, it will be 88 days since then.

As highlighted by MilanNews.it, Simon Kjaer has continued to perform on a consistent level. In the post-lockdown period, the Dane only missed one game (against SPAL), which was probably the only bad game by the Rossoneri in recent months (ended 2-2).

The former Sevilla man turned out to be one of the best signings in the 2019/20 season, of all teams, if you look at his cost and quality. He didn’t just fill a depth flaw in Milan’s squad, but he also because an undisputed starter at the back.

His performances probably ‘held back’ the management on the market, unwilling to invest in a player who, at least at the moment, would certainly have been behind the No.24 in the pecking order.

Matteo Gabbia’s positive COVID-19 test has accelerated, and in fact obliged, the return of Romagnoli. Against Inter, the usual Milan duo will reunite at the back, and before Romagnoli got injured it was one of the best defences in the league.

Obviously, the former Roma man risks paying for the long inactivity, but he has been able to train at Milanello during the international break. It will be a new test of the backline and if it goes well, Milan can sit back an relax.