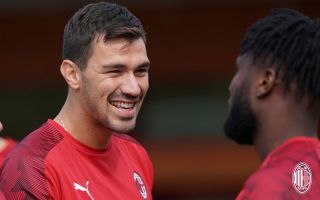 MN: Romagnoli travels to Manchester despite not being 100% – the latest on his condition

AC Milan captain Alessio Romagnoli will travel with the team for tomorrow’s game against Manchester United at Old Trafford, but he is not at 100%.

Pioli has only been able to name a 19-man squad for the first leg of the tie, with Theo Hernandez, Ismael Bennacer, Hakan Calhanoglu, Ante Rebic, Zlatan Ibrahimovic and Mario Mandzukic not available for the game.

MilanNews reported earlier today how from the training images that have been broadcast from Milanello it became apparent that Romagnoli had not trained with the team either, raising doubts about whether he would travel with the squad.

According to what is being reported by MilanNews, Romagnoli left with the team but is not at his best. The Rossoneri captain, in fact, got stamped on accidentally during training and was in pain afterwards.

This all points towards a Kjaer-Tomori centre-back pairing against United, so in a way the news might have resolved some of Pioli’s doubts.