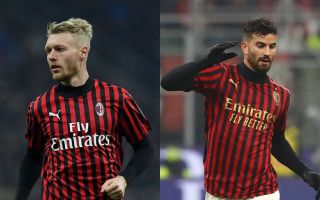 AC Milan are ready to reconstruct their defence and are in the market for a new partner for Alessio Romagnoli, according to a report.

The latest from MilanNews notes how the Rossoneri are after a new centre-back and a new right-back to start alongside Romagnoli and Theo Hernandez next season. However, attention must also be paid to the reserve roles, as the injuries sustained by Simon Kjaer, Mateo Musacchio and Leo Duarte have proved the importance of depth.

Musacchio has a contract expiring in June 2021 and his agent – Marcello Lombilla – has underlined how much the player wishes to remain at Milan.

In January, the Diavolo moved to secure Kjaer on loan from Sevilla who quickly became the starter over the Argentine. Milan have the option to make the 31-year-old’s move permanent for €2.5million, and while not an expensive operation it is far from obvious, especially if the new revolution led the club in another direction.

Milan when thinking about buying a new centre-back will have to consider the two back-ups, and Gabbia has a big chance to play for one of those two spots, while the other slot could be taken by Musacchio or Kjaer.

Duarte should not be forgotten about but his recent injury makes things even more difficult, though if he were to end the season well it is not excluded that he could end up above Kjaer and/or Musacchio in the hierarchy.

It also cannot be excluded that Milan go into next season with five central defenders and not four, especially if Milan managed to qualify for the next Europa League.

The report adds how the feeling is that both of Kjaer and Musacchio are unlikely to stay and that at least one will leave, mainly due to economic reasons.

Redeeming Kjaer, as previously pointed out, would cost €2.5m, to which (considering a single year of contract) the €2m gross salary would be added for a total of approximately €4.5m. To date, Musacchio earns €2m net, so keeping him until his contract expires would cost €4m.

If offers of over €4.5m were to arrive for Musacchio (his residual value on the balance sheet from 30 June), Milan would sell, but if not then he is more likely to stay until 2021 or longer if he studied a renewal proposal with a reduced salary.