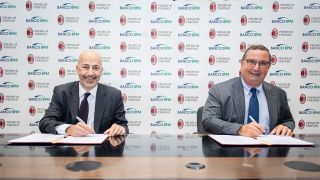 MN: The figures behind the renewal of Milan’s partnership with Banco BPM

In addition to the reinforcing the squad, Milan are always looking to improve the club on a corporate level. Just yesterday, the Rossoneri announced that they have renewed their long-standing partnership with Banco BPM.

The parties were able to reach an agreement on a three-year renewal, wanting to continue on the same path together. Therefore, the Italian bank will remain as Premium Partner, Official Bank and Jersey Sponsor of the Women’s first team.

According to Pietro Mazzara of MilanNews.it, the new deal is worth €1.8m plus bonuses per year in favour of the Rossoneri. Some fans perhaps expected more, but it must be taken into consideration that revenue on the women’s side isn’t that high.

Meanwhile, directors Paolo Maldini and Ricky Massara are working to complete the squad on the transfer market. Milan’s season will start next week with the Europa League qualifier against Shamrock Rovers, four days prior to their league opener.

READ MORE: Milan provided Tonali with a personal trainer to prepare him for training