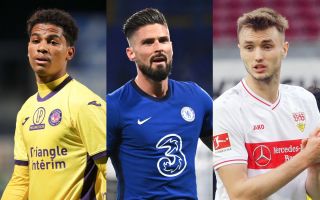 MN: The latest on Adli, Giroud and Kalajdzic as Milan look to bolster attack

Milan are determined not to experience the same issue up front as they had this past season, mostly as a result of Zlatan Ibrahimovic’s injuries. Therefore, they are looking to make some attacking reinforcements this summer.

As reported by MilanNews, three names have been mentioned lately. The first is Olivier Giroud, with whom Milan already have an agreement on the contract. However, the Frenchman still needs to free himself from Chelsea.

There is optimism that the deal can be closed, especially from the player’s entourage. The second player is Sasa Kalajdzic, whose agents Milan had a meeting with yesterday. They like the striker, but the costs of the operation are too high for now.

The third player is Amine Adli, the versatile 21-year-old who currently plays for Toulouse in Ligue 2. He can play both as a second striker and a right-winger, which could be useful for Milan. The latter are aiming for his signature.