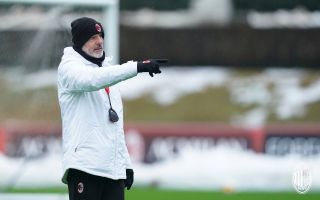 MN: The latest updates on injured trio from Milanello – key duo should be back vs. Parma

AC Milan are hoping to have three of their key players back for the weekend’s game against Parma, but two will miss tomorrow’s game.

Zlatan Ibrahimovic has missed the last four games with a thigh injury that he sustained during the 3-1 win over Napoli, while Rafael Leao has been out since the most recent international break.

According to the latest from MilanNews and their reporter Anto Vitiello, the Rossoneri will be able to count on Leao for the trip to face Sparta Praha on Thursday should they choose to use him.

The Portuguese winger has recovered from the muscle injury he sustained, and this morning he started coaching as a group with the rest of the team at Milanello.

Alessio Romagnoli and Hakan Calhanoglu did not participate, as they will probably rest for tomorrow’s trip to the Czech Republic, while Ibrahimovic and Ismael Bennacer did personalised work outs and therefore will not be risked.

The target, according to Vitiello, is to have the latter two ready for Sunday’s visit of Parma to San Siro.