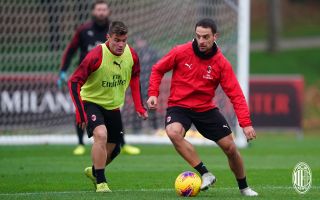 MN: The report of today’s training session at Milanello

AC Milan are making their final preparations ahead of Sunday’s clash away at Parma, which will be crucial for the Rossoneri. After 1-1 against Napoli, they are in desperate need of three points to start climbing the standings.

The Rossoneri were back at Milanello today for their penultimate session ahead of the game. Furthermore, as reported by MilanNews.it, Zvonimir Boban, Paolo Maldini and Frederic Massara were also present to witness the training.

At 11 am, the players started in the gym with muscle activation, before heading out to the pitch to do some passing in tight situations. After that, per the report, they had a few athletic exercises.

The goalkeepers, meanwhile, worked under the orders of their coach Turci. After the first part, Pioli employed two full-size teams to start the tactical phase. Finally, according to the report, there was some time for tests on set pieces.