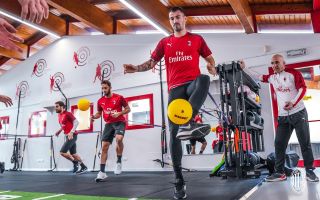 MN: The report of today’s training session at Milanello

This morning, the AC Milan players were welcomed by the snow at Milanello. Ahead of Sunday’s clash with Sassuolo (kick-off 15:00), the Rossoneri had their penultimate training session today.

As MilanNews.it reports, the team spent the entire session in the gym for relaxation, addressing the work with a series of exercise on the ground combined with tools. On the pitch, only the goalkeepers engaged in specific work with their preparer.

Tomorrow (Saturday), the team will finish the training session in the morning, followed by the press conference of Stefano Pioli at 2 pm. Hopefully, they will be in top shape for the important game on Sunday.

Following the victories against Parma and Bologna, the Rossoneri could make it three consecutive wins for the first time this season. Thus far, they have only managed to get to two. In other words, three points would prove that they are on the right track, finally.