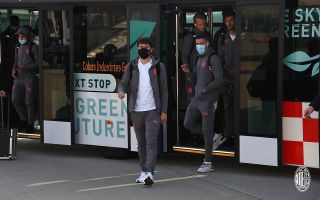 MN: The schedule of Milan’s day ahead of Porto game and the predicted line-up

AC Milan know they are facing a must-win game tonight against Porto at the Estadio do Dragao, and preparations are well underway.

According to MilanNews, the programmed for the day ahead of the kick-off at 21:00 CEST is as follows: the team will perform muscle activation in the hotel, followed by lunch, rest, snack and finally the technical meeting. The journey to the stadium is scheduled for 18:15 and Milan will return to Italy after the game via a private flight to Malpensa.

Ciprian Tatarusanu should be in net with a back four consisting of Pierre Kalulu on the right, Simon Kjaer and Fikayo Tomori as the centre-backs and Davide Calabria playing at left-back.

Ismael Bennacer and Sandro Tonali will start in the midfield with Kessie suspended while Alexis Saelemaekers, Rade Krunic and Rafael Leao play behind the centre-forward Olivier Giroud again. Zlatan Ibrahimovic will start from the bench, while Tiemoue Bakayoko returns.