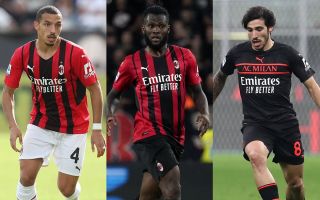 MN: The true dilemma for Pioli is the midfield – three great players for two spots

Compared to last season, AC Milan have much better depth and have thus managed to ride out the injury crisis at the start of the season. But the increased competition has given Stefano Pioli more to think about.

As highlighted by MilanNews, the manager’s real dilemma is the midfield tandem, where there are currently three great players fighting over two spots.

Sandro Tonali is the real surprise, as stated by the outlet, as no one expected him to explode so quickly. We all knew his qualities but after just ten games, he has become an almost irreplaceable element of the Rossoneri midfield, and that is impressive.

Ismael Bennacer has recovered and is now in good shape again, playing very well in the last few games. Having said that, Kessie has recovered from his tough start and Pioli has always considered him a key player for the team.

All three have different characteristics, there’s no doubt about it, but it seems Pioli is still struggling with the selection for each game. This is, of course, a luxury problem and one  Milan should be happy about.