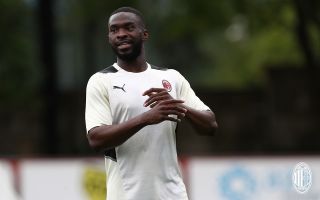 MN: Tomori ready to face another chaotic run of games after a much-needed rest

Another tough bit of the fixture calendar awaits AC Milan and they can count on a fully fit Fikayo Tomori as they enter a frantic pre-Christmas period, a report claims.

The international break allowed the players not called-up by their respective countries to recharge their batteries ahead of what is a very demanding schedule with games coming thick and fast. MilanNews writes how the player who this applies to more so than anyone for Milan is definitely Fikayo Tomori.

He was not called up by the English coach Gareth Southgate meaning the €29m summer signing was able to rest, and he was certainly due some rest too. He has started 15 of the 16 games that Milan have played so far this season (12 in the league and 4 in the Champions League), and he even came on against Venezia meaning he has been in every game.

The report adds that he has racked up 1350 minutes of playing time already this season showing his importance but also the need for a break. After Tomori, the player with the second-most minutes for Milan to date is Rafael Leao with 1174.

Milan’s hectic pre-Christmas schedule start on Saturday against Fiorentina at the Artemio Franchi and runs until 22 December against Empoli away. In between they will face Atletico Madrid and Liverpool to close the Champions League group stages, as well as the crucial game against Napoli, plus other games against Sassuolo, Genoa, Salernitana and Udinese.

Tomori as always will be called upon to be at his best, and thankfully he starts on Saturday feeling at 100%.