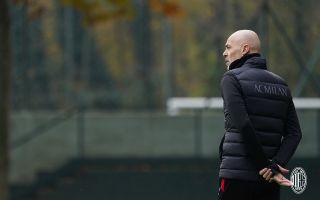 MN: Training resumes after two days off – update on Messias, Romagnoli and Castillejo

Some news has arrived regarding the condition of three players ahead of Saturday’s game against Fiorentina at the Stadio Artemio Franchi.

AC Milan will be looking to continue their superb start to the Serie A season – one which has seen them win 10 of their first 12 games and remain undefeated in the process – but a trip to Florence is always a difficult prospect especially given that new head coach Vincenzo Italiano has done a good job steering them to 18 points from their first 12.

According to what is being reported by MilanNews, training resumed at Milanello this afternoon and Zlatan Ibrahimovic was present as expected after his commitments with Swede.

However, both centre-back Alessio Romagnoli and winger Samu Castillejo did personalised work so their appearance against La Viola remains in doubt for now, while Junior Messias also worked in a group with the rest of the team and should therefore be available.

READ MORE: Real Madrid thrilled with loanee’s development – recalling him early from Milan will be difficult