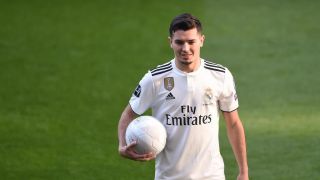 Brahim Diaz will land in Italy on Wednesday ahead of doing his medical and becoming a new AC Milan player.

According to MilanNews, the idea of signing the 21-year-old only came about in recent weeks, as the Rossoneri management had the intention of signing a new attacking reinforcement available to head coach Stefano Pioli as soon as possible.

The negotiations with Real Madrid were not easy given that Los Blancos were clear about not wanting to lose control of the player, and right until the end they kept this position, refusing the option to buy with a buy-back clause that was proposed by Milan.

After days of contacts and talks on the formula, on Tuesday the Rossoneri finally satisfied Real, and the player will arrive today for his medical visits and to sign with his new club.

Brahim Diaz is therefore ready to start his new Milan adventure, albeit on a dry loan, and coach Pioli will thus be able to count on a new offensive reinforcement.

However, the report adds that the two clubs will talks again during the season to discuss the formula for a possible purchase. The operation, which can also be labeled as a gentlemen’s agreement, was handled by the intermediary Edoardo Crnjar, decisive in starting and keeping the contacts between Milan and Real Madrid alive.