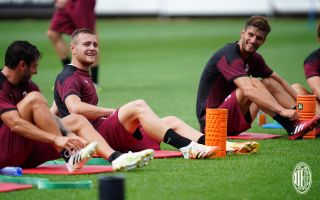 MN: Why Pobega was absent during Milan’s 5-0 preseason win against Modena

Some eyebrows were raised by the absence of Tommaso Pobega during today’s 5-0 friendly win against Modena at Milanello.

The young midfielder impressed during the Rossoneri’s first friendly of the summer, registering two assists in the 6-0 victory against Pro Sesto, but there continues to be speculation in the media that Milan could sell the 22-year-old midfielder amid interest from other Italian clubs and abroad.

He did not feature at all during the 5-0 win over Modena – in which Brahim Diaz, Rafael Leao, Fikayo Tomori, Rade Krunic and Theo Hernandez got on the scoresheet – which prompted rumours as to his whereabouts.

MilanNews though reports that although he was on the squad list for the game, the young midfielder was in fact absent due to injury. He missed the game with some discomfort, namely muscle fatigue caused by the intense work load of preseason. We hope to see him back in action soon after an encouraging first display.