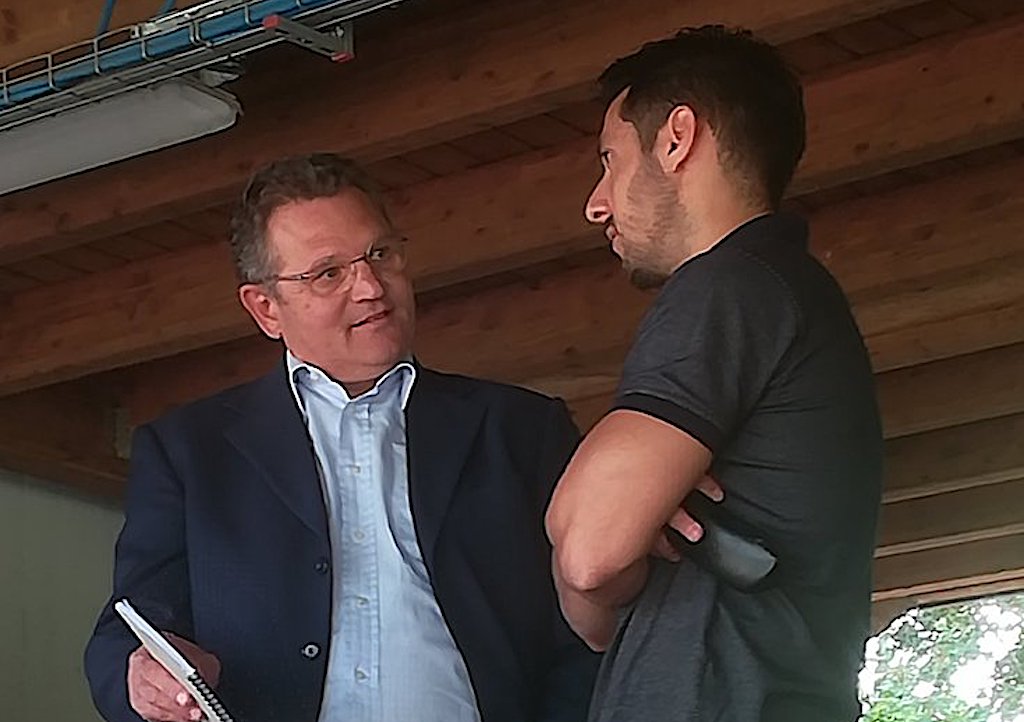 Since American hedge fund Elliott Management Corporation took control in 2018, the club have shifted more towards a youth-led recruitment strategy based around signing young players with high potential that could form the future backbone of the team and improve the accounts at the same time.

Moncada has become a big part of that, regarded as one of the best scouts in world football and the man who built the Monaco side which competed on all fronts in 2016-17, winning Ligue 1 and reaching the Champions League semi-finals.

He spoke to the podcast Prolongation about his experiences at Milan so far and about his working relationship with Paolo Maldini.

“Among the things I like at AC Milan is the fact that we work with Paolo Maldini, who played there, he loves this club so much. When we sign a player, Paolo Maldini talks to him a lot and to his family,” he said.

“When a young player arrives at Milan he says ‘ah, it’s Paolo Maldini, it’s impressive.’ If Maldini’s work helps to understand where the young man is arriving and his new reality? Yes, absolutely.

“We say to these young people: ‘Ok, so you have arrived at Milan, the work begins now. We believe in you, you don’t have to be shy, show that you have talent and impact. AC Milan are a huge club. Everything depends on your success’. We try to reassure the young players.

“When Paolo tells me that this player is worthy of Milan, that we can structure him, help him grow, I listen to him because he knows how to become a top player. He won a lot with Milan. He has passion in his blood.

“When we sign a player, Maldini pays particular attention to everything because he wants the player to be an added value. I talk a lot with him.

“Milan, before, was already a top club, so maybe they didn’t need to focus much on scouting. They brought the best players like Kakà and Shevchenko who already played in CL and he was already very good.”

We wrote a feature last month about Milan’s team of data experts that number crunch both the performances of the team and potential signings, and Moncada outlined what they do.

“Elliott asked to develop the sports area with scouting: data, statistics. So we decided to create two things: the scouting area and the ‘data’ area. One works with the other every day. When a scout likes a player, we take a look at the numbers and everything else,” he continued.

“When the ‘data’ area tells us that we have a strong player with numbers, I ask the scouts to go watch him. I like this mix: work with the help of statistics. For Elliott it is important to have reports with statistics, videos, not just the observations of the scouts.

“Milan didn’t have this reputation for playing with young people, so we worked on this, we talked a lot with families of the players saying that if we take the youngster, it is because we believe in him and not to play him only once in a while.

“Today, there are many clubs, agents, scouts who call me to say ‘We want to come to Milan, what you do is very interesting.

“I have friends in the Red Bull group or in Dortmund and other clubs who work a lot on scouting and who tell me ‘Bravo, we see the changes at Milan, you work very well’.”

Moncada then offered a bit of background on a few of the recent signings, starting with Theo Hernandez who is now worth double what Milan paid for him.

“He is a player we knew from Atletico Madrid’s U17s and U19s. It was a job that lasted 4-5 years. And the opportunity to catch him came when he was a bit in trouble at Real Madrid, who had just got Ferland Mendy.

“We had seen his games as a young player, his progress at Real Sociedad on loan, we had talked to his entourage. Theo is a train. He destroys the whole left wing. We want them like this. The modern full-back in a great team has to be a train, run a lot, like crazy.

“We already followed him at Atletico Madrid, then at Real Madrid, then he went on loan to Real Sociedad and I said to myself ‘no one may care about him’, and the truth is we didn’t have that much competition when we got him.”

On Simon Kjaer : “Everyone was a bit skeptical in the environment and in the newspapers when we took him. We were in a difficult moment with the change of coach. Stefano Pioli had just arrived, we had also taken on many young players, but the player was missing experience.

“Elliott told us that they had spent a lot in the summer, so we had to find a low-cost operation and a player who was ready to play right away, who spoke the language, who was strong tactically.

“We evaluated many names of central defenders from various championships, but above all from the Italian one, because we said it would be easier to adapt and the name of Simon Kjaer has arrived.”

On the characteristics of Kjaer: “We’ve known him for years. We analysed his matches with Atalanta. It wasn’t bad, his match against Dinamo Zagreb was very good. Then I took the list of Atalanta players and I said to myself: ‘Who was not successful at Atalanta, but was he strong elsewhere?’ and I made a list of a few names.

“Ibanez himself, who is one of the best in Rome, did not play at Atalanta. With Simon we were sure we had a player with the right spirit, serious, a fighter, with the physique we wanted. Some say he’s slow, but that’s not true: he has perfect positioning, runs a lot and is tactically good.

“We also did some work to see his physical problems, but it was nothing big. Then another positive factor is the cost of the operation. In the end, it cost €2.5million, it’s cheap. His salary I can’t say, but it’s not expensive in the sense that many teams can afford a Kjaer.

“We told Simon: ‘We need you as a leader’. He made himself available immediately. He was crazy for Milan, he has been a fan since he was a child. He was always a good player. He reminds me of Ricardo Carvalho when we took him to Monaco.

“Simon has even more grit, he’s not here to joke. We have to say, now he is one of the best central defenders in Serie A, a very important player for the team. Ok, Ibrahimovic has changed many things, but Simon has also made his contribution, he is important in the project.”

On Jens Petter Hauge: “The final decision to take him came with the match between Milan and Bodo/Glimt. I have to thank the ‘data’ area, who told me about this player between May and June.

“We were in full lockdown. We couldn’t travel. And I wanted to see this guy live. I need it, because I wanted to see his ability to accelerate, his pace changes, his explosiveness. Then, we resumed the season, we won games.

“My boys. they said to me many times ‘Geoffrey, look at Hauge…’. Then, at the end of the season, I asked my scouts to analyse the matches with videos. Everyone told me something positive about this player. I didn’t even get negative feedback.”

“Love at first sight with Hauge, we make him progress, we don’t put pressure on him. It comes from Norway, no pressure. We have players who are more ready than him like Rebic, Leao, Calhanogu. He has to work and is already part of the team, he plays games. An impressive figure is the number of teams that called us immediately after signing for the player on loan. At least 20 teams.”

On Leao: “If you remember, when we were doing badly with Giampaolo he had some interesting performances. I remember his match against Fiorentina. He had arrived at a difficult moment and it was he who stood out among the players.

“Then we have changed game system, got injured, Ibrahimovic arrived, Leao disappeared a bit. The coach showed him other things, he had to play on the wing with new training methods and everything else. Today he is a very important player for us, we have seen him against Roma and Inter, he is capable of delivering exceptional performances.”

On the decision to buy Leao: “When we took him, we didn’t just take him for what he did at Lille. We knew him even more for what he did before at Sporting Lisbon. In the youth sector he was exceptional.

“Inthe  Youth League had played against Juve at a very high level. We evidently saw what he did at Lille, but it is above all for what he had shown to Sporting that we took him. I saw him play as an attacking midfielder at Sporting, incredible.

“He can still improve physically, he can score even more, because he can score very easy goals or other top-class goals. He can score in the future even with his head, he has the physique to do it.”