Montella: “Cutrone? I had to sit on the bench, so he can too!”

AC Milan boss Vincenzo Montella has admitted that Patrick Cutrone may have to wait for chances from the bench despite impressing so much in recent games.

The 19-year-old scored the only goal as Milan won 1-0 in Macedonia against FK Shkendija to complete a 7-0 aggregate victory.

The victory means that the Rossoneri enter the group stages of the Europa League, with the draw set to take on Friday.

“We overcame two preliminary rounds and tomorrow we too wait for the results of the draw,” the Coach told Sky Sport Italia.

“We approached this game the right way, even if there were a few too many dips in concentration. Now we’ve got Cagliari this weekend and then the break for international duty.

“There is no better training session than a match, to check for errors, tactical situations and gaining experience. We’ll play every three days at least until December, so it’ll be tough physically, but also positive to play so many matches.”

Montella revealed that Milan have indeed received offers for Cutrone and despite the decision to keep him, he will have to remain patient for opportunities.

“It was a courageous choice to keep Cutrone, as he had so many offers this season, but he is earning his place in the Milan squad with his performances and goals. He works for the team, which is positive.

📺 WATCH: #ACMilan take a 1-0 lead against Shkendija thanks to Patrick Cutrone! 🔴⚫️

“I am very proud to train these lads, as even in their posture I could see they all wanted to be here for this game. They didn’t want to have the day off.

“I think Gabbia did really, really well on his debut, just as Zanellato did in midfield, and it shows the good work of our youth academy.”

Montella used the opportunity to test out a 3-5-2 formation, but he wishes to keep a “basic” style.

“I need to focus on the principles of football more than the system, because that will be constantly mutating depending on the characteristics of the players at my disposal. 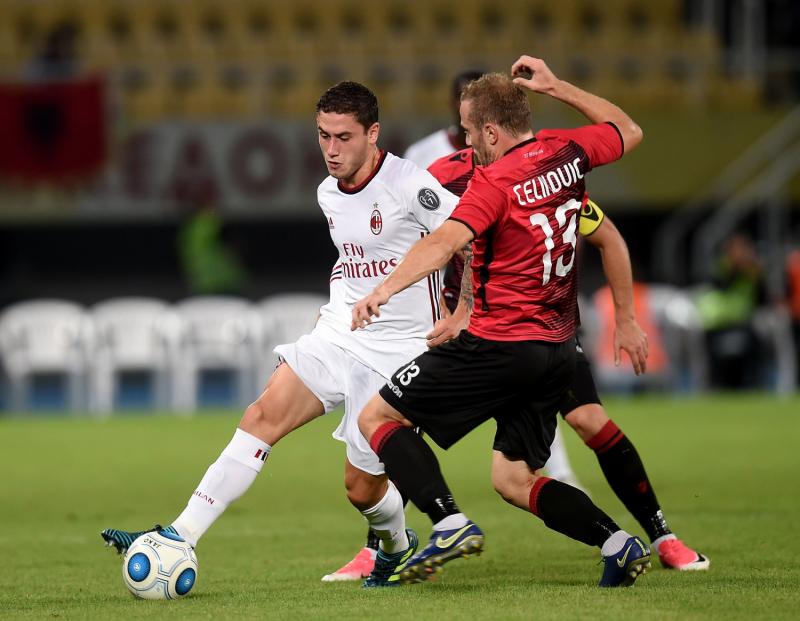 “This squad was built to play football in a certain way and I hope there won’t be too much confusion, as we’ll have a basic playing style.”

Could Milan be among the favourites to with the Europa League? Montella believes that it is simply too early to tell.

“I think a club like Milan has the duty to honour all competitions. I care about the Europa League, it can be very satisfying, and we should honour every game in every competition. We suffered a little tonight by testing a new system and many young players, but we won and everyone realises what it means to wear the Milan jersey.

“Can Milan win the Europa League? We signed so many new players and need to become a team. I think after two months of work, it’s still too early for me to tell how strong the side is and therefore also difficult for those on the outside to judge.

“The important thing is to have no regrets and give our all, especially during difficult moments.”