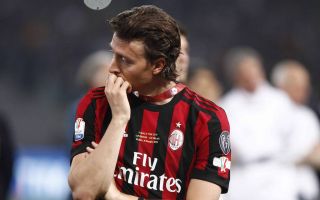 Riccardo Montolivo has criticised AC Milan for letting go of Manuel Locatelli and pleaded with his former club to be patient with Sandro Tonali.

Montolivo joined on a free transfer back in 2012 when his contract with Fiorentina expired, signing a four-year deal and drawing huge praise from then head coach Max Allegri.

However, his performances quickly began to turn and he became a divisive figure among the fan base, despite being given the captain’s armband in 2013. He was even completely frozen out of the senior squad under Gennaro Gattuso last season in what was a sad end to his career at Milan.

He has previously spoken out about the end of his time at Milan, and he gave an interview to Sky Italia about how his farewell went.

“It was a bitter farewell, I still don’t understand why certain things happened. I never had a plausible explanation, even today I don’t know why,” he said (via MilanNews).

“Once we were in an emergency and they let Calabria play in the middle of the field even though I was available. Other times I was called up only because the Primavera boys were injured. It went like this, but I don’t look further back, I look to the future.”

On Sandro Tonali, he added: “He is a player with great prospects, he has everything to become a great midfielder. He is very young and therefore making a leap from a small team to a great team is not easy.

“His insertion is going slowly because Milan is doing very well and in the middle of the field Bennacer and Kessie are a perfect couple.

“Tonali must not be in a hurry, he must think long term, he does not have to work to be a starter at Milan now. but to be so for the next ten years. You need patience, unfortunately there is little of it in football.”

Another midfielder who has divide Milan’s fanbase is Manuel Locatelli, now thriving at Sassuolo after seemingly being deemed not good enough to play for the Rossoneri.

“I was sorry when he was badly sold, we were table mates: I was also the one who recommended his experience at Sassuolo. He is growing exponentially,” he said.