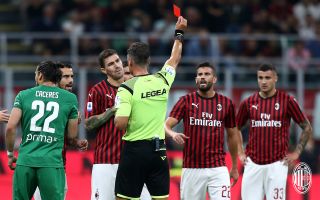 Following the red card against Fiorentina, Mateo Musacchio has been handed a one-game ban for a ‘serious game foul’, as was announced by the Sporting Judge earlier this evening (via MilanNews.it).

The Argentina defender was shown a straight red after a reckless challenge on Ribery, although the referee needed the help of VAR to make the right judgement. In many ways, it was a very unnecessary tackle, which cost the Rossoneri dearly.

On Saturday evening, therefore, Giampaolo will have to do without the defender alongside Romagnoli. Most likely, Duarte will get the chance from start as he came on last time out to try to save the situation at the back.

However, the youngster Gabbia shouldn’t be ruled out either, given that he played a few games for the Rossoneri during the pre-season. In the coming days, we will know more about the predicted starting eleven for the crucial clash.

LISTEN TO THE LATEST EPISODE OF OUR PODCAST