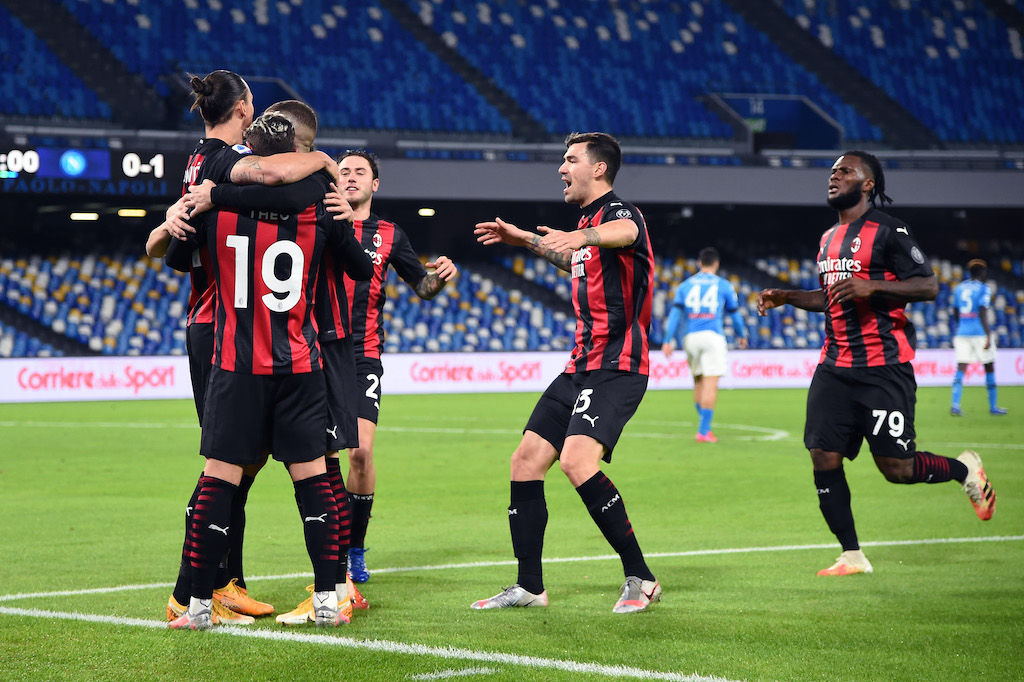 AC Milan produced arguably their most impressive result of the early season as they went to the Stadio San Paolo and beat Napoli for the first time in 10 years.

It feels like we write it every week, but it was once again the Zlatan Ibrahimovic show as his brace either side of half-time fired the Rossoneri into a two-goal lead, though he did limp off later in the game with what looked like a thigh problem.

Dries Mertens pulled one back for Napoli to make it a tense last half hour, but Milan’s chances were helped by the fact that Tiemoue Bakayoko was sent off against his former side for amassing two yellow cards.

The Diavolo would hold on and clinch a fantastic 3-1 victory with a late goal from Jens Petter Hauge, their first at the San Paolo since the Scudetto season in 2010-11 – another game which Ibrahimovic had a hand in – and enough to go back above Sassuolo to top the league.

The big story before the game was that head coach Stefano Pioli and his assistant Giacomo Murelli had to stay home due to contracting Coronavirus, with Daniele Bonera the stand-in head coach.

He sprung no surprises with the starting XI as Ante Rebic came in on the left wing in place of the injured Rafael Leao in what was an otherwise first choice line-up.

There was a moment of panic for Bonera early on as Simon Kjaer pulled up with what looked to be an overstretched groin from an interception. He spent a minute or so off the pitch before coming back on, much to the relief of his team-mates.

Milan had the first chance of the game inside the eighth minute as Ibrahimovic dropped deep to take up playmaking duties, chipping a ball in behind the defence for Rebic who fired straight at Meret on the volley.

The Rossoneri continued to threaten and this time Meret was forced into a better save when a neat interchange from Milan ended with Calhanoglu firing an effort from 25 yards out that the Italy international parried wide.

From the resulting corner the ball ricocheted into the path of Kjaer who should have scored, but hit his reflex effort over the bar as he was falling backwards.

Milan continued to probe, and Saelemaekers should have done a lot better than skying his effort after cutting inside following an incredible cross-field pass from Kessie.

The away side got the goal that their early start probably deserved in the 21st minute, and it was that man Ibrahimovic again. Theo Hernandez found space to cross on the left wing and whipped in an inch-perfect cross towards the Swede, who finished with an absolutely sublime glancing header from about 15 yards out.

Napoli then came close to levelling a few minutes later with a flurry of chances. Firstly Donnarumma made a fantastic save low to his left to deny a Mertens shot that was destined to creep inside the post, and from the corner that resulted Bakayoko had an effort cleared off the line, Di Lorenzo hit the crossbar from seven yards, then Lozano had a shot fingertipped over.

Politano twice found space to shoot from the edge of the box as the Partenopei went out in search of an equaliser, but the first time he fired well over and his second attempt was curled wide of the far post.

Milan would have had a glorious chance to make it 2-0 when Kessie stole the ball back from Fabian Ruiz and had the easy job of putting Ibrahimovic through on goal, but the referee – who made some questionable calls in the first half – judged it to be a foul.

As Calabria was booked for time wasting two minutes into the second half, there were calls for Bakayoko to be given his second yellow for what appeared to be an arm in the face of Theo Hernandez as he knocked the ball beyond his compatriot, but the referee chose to let him off.

Ten minutes after the restart, Milan got their second goal and it was that man Ibrahimovic again. The counter-attack was perfectly executed as Calhanoglu released Rebic into space down the left side and he twisted to buy time for Zlatan’s far-post run, eventually finishing with his knee after a pinpoint cross.

The Rossoneri thought for a brief moment that they had made it 3-0 when Ibrahimovic raced through on goal and finished past Meret, but the offside flag rightly went up as the ball hit the back of the net.

Moments later the lead was halved. Kessie lost the ball near the edge of the Milan box – with some suspicion it might have been a foul by Bakayoko – and the ball eventually found Mertens who span and fired under Donnarumma from close range to make it 2-1.

Remarkably, Bakayoko then saw red against his former side. Theo Hernandez went on a typical surging run from his own half and again got half a yard ahead of the Chelsea loanee, who brought him down and was instantly shown a second yellow.

Milan then began to push for a killer third goal, and Kjaer could have perhaps done better from a corner situation again when he got to a near post delivery and could only head straight at Meret.

Napoli threw Andrea Petagna on and the former Milan Primavera player was bearing down on goal not long after his introduction, though Donnarumma saved well even if the offside flag was up.

Bonera made a double change as Rebic and Saelemaekers made way for Jens Petter Hauge and Samu Castillejo respectively.

There was a moment of worry though as with 12 minutes to go Ibrahimovic collapsed in a heap while holding his left hamstring, and he was forced off after trying to continue, replaced by Lorenzo Colombo.

The final change saw Rade Krunic brought on to reinforce the midfield, with Calhanoglu making way. Seconds after that, Fabian Ruiz dragged a slow rolling shot narrowly wide of Donnarumma’s near post.

Milan killed the game off in added time and it was a memorable moment for Hauge, who burst past Manolas inside the box before firing in via the crossbar and via a touch from Meret to score his first Serie A goal for the club.

☝ Goal number one for @jenspetter99 in Serie A.