Donnarumma (8 MOTM): The young goalkeeper was by far our best player on the pitch, despite conceding 4 goals, making incredible saves and controlling his penalty area.

Abate (5): A disappointing game for the vice-captain of the Rossoneri. The right-back didn’t manage to replicate his performance against Torino into this match, missing a sitter early in the first half and displaying poor defending.

Gomez (6): Making his debut for the Rossoneri, the Paraguayan center back looked a bit shaky from the start but had a solid overall game after eventually shaking off the pressure.

Romagnoli (6): Not the best of games for the young Italian but he did do well to handle the defense at times. He scored an own goal in the dying minutes of the game and tried to keep it out using his hands, leading to a yellow card.

De Sciglio (5): We hoped the young full-back would replicate his form from the last few games of last season and the Euros but so far hasn’t done so. Hopefully, he will be able to in the upcoming games.

Kucka (4): A Terrible performance from someone who’s arguably been our best midfielder last season. The Slovak was almost like a ghost and when he showed up, he was getting booked. He got sent off after a second yellow card for a silly tackle.

Montolivo (5): We’re probably used to it by now, il Capitano yet again put in a poor performance in the centre of that midfield and you wonder when things are going to change.

Bonaventura (5.5): Not really what we’re used to seeing from the Italian midfielder, who is one of our best players. Didn’t have a bad game, but didn’t exactly have a good one either.

Suso (7): The Spaniard didn’t start off too well, but got much better as the game progressed. He got himself an amazing goal and an assist and was one of our best players on the pitch.

Bacca (5): After scoring a hat-trick in the last game against Torino, the Colombian striker was expected to do much better than he did in this match. He barely posed any threat to the opposition.

Niang (5): Despite getting a goal and creating a few chances, the Frenchman had a bad game and got sent off for an unnecessary and mindless challenge on Pepe Reina towards the end of the match.

Sosa (N/A): The Argentine veteran made his debut after having signed for the Rossoneri this summer. Showed a few good touches and pieces of play but was laying deep and barely part of the attack. 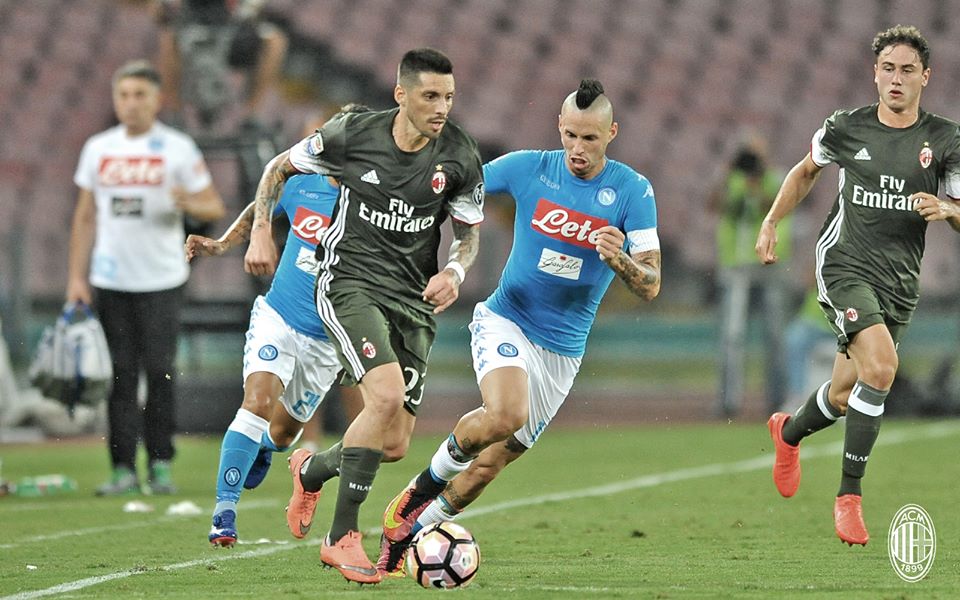 Calabria (N/A): The young Italian right-back should be given more game time. Coming on for a disappointing Abate, he did more in a few minutes than the vice-captain did all game.

Lapadula (N/A): Another debutant coming on for the Rossoneri was Gianluca Lapadula. Wasn’t involved much in the game as he didn’t have much time to do anything.

Montella (6): Coming off the back of an intense victory last week, Vincenzo Montella wanted to keep his players motivated. We saw a fired up team at the start of the first half and in the second half as they came back from being behind 2-0. Unfortunately, it wasn’t enough to overcome the opponents.