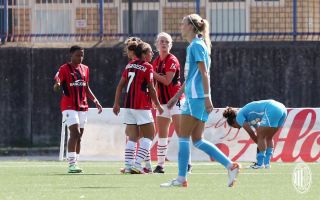 The AC Milan beat Napoli by a score of 1-0 as the lone goal was scored by Sara Thrige. The hard-fought victory leaves Milan in third place in the current league standings.

It also keeps them in contention for Europe next season with that being a big objective, and the clean sheet is certainly a welcome boost.

Before the first ball was kicked and the match even began, there were a few surprises. The first of which was the lineup. Guðný Árnadóttir and Christy Grimshaw started in place of Laura Fusetti and Lindsey Thomas, respectively. In the lead-up to the match, we suggested that Árnadóttir should replace one of the veteran defenders due to the strength of her performances over the last international break.

Milan’s coaching staff seems to have agreed with this assessment, thus explaining why she was given the start.

The match started with Napoli playing in a narrow formation that the Rossonere found hard to break down. The Partenope were quite aggressive and frequently disrupted Milan’s play. They also made more runs towards Milan’s box while the latter were forced to resort to long balls over the top.

This eventually led to AC Milan conceding a penalty. Laia Codina brought Arianna Acuti down, though the contact may have happened outside the box. Codina appeared to have gotten the ball as well and Acuti tripped over her. However, the ref gave her a yellow card for her actions, and Napoli were gifted a penalty. And in a repeat of the same scenario from last season, it was Eleonora Goldoni who would step up to take the spot-kick for Napoli. Fortunately for Milan, she hit the crossbar from the spot.

Time would go on and Milan would continue to battle. Eventually, they regained control of the match. The regained control would eventually culminate in Sara Thrige giving the Rossonere the lead in the 24th minute. After Greta Adami’s shot bounced off the palms of Yolanda Aguirre, Andersen would pounce an on the rebound and tap it home.

Vero began to do what she usually does and run the show. In the 27th minute, she forced Aguirre into another fine save. Without Yolonda’s efforts, the scoreline would have been much worse for Napoli. Milan had a clear chance to double their lead in the 42nd minute, as Garnier brought Grimshaw down in the box and AC Milan were awarded a penalty.

Valentina Giacinti stepped up to take the spot-kick and unfortunately, she shot the ball directly at Aguirre. The Rossonere skipper didn’t have the best game and the missed penalty was emblematic of it. Tragedy would strike again just a minute later after Codina got her second yellow following yet another encounter with Acuti. And just like that, the Rossonere were down to ten players.

After the halftime break, the Diavole took the field in a 4-4-1 formation to see out the game. They had to put in a lot of effort to win it and it was Valentina Bergamaschi who took the bull by the horns. Her first chance was headed wide in the 47th minute. Ten minutes later, she set off on a long run and fired a shot that was denied by the foot of Aguirre (57′).

Despite being down to ten players, Milan took over the second half and had the majority of possession and chances created. Napoli would eventually ease back into things once the Rossonere began to tire due to relentless running.

In the 80th minute, Evdokiya Popadinova rifled a shot on target. Thankfully, Laura Giuliani was there to make the save. As the game came to a close, Bergamaschi almost conceded another penalty. However, the ref determined that she got the ball, and waved play on. In the end, the Rossonere would prevail.

It was a hard-fought victory, and Codina’s sending off was the heavy price to pay for this win. Milan will now take on AS Roma next Sunday without their star defender.

There were few standouts for the Rossonere during this game, but Andersen was one of them. Without her, Milan would not have won this match.

Milan dominated the match, as they had 51% of the possession, along with thirteen shots taken. Seven of those shots were on target.

It was a thoroughly dominant display from them, with the only downside being that it did not result in more goals. 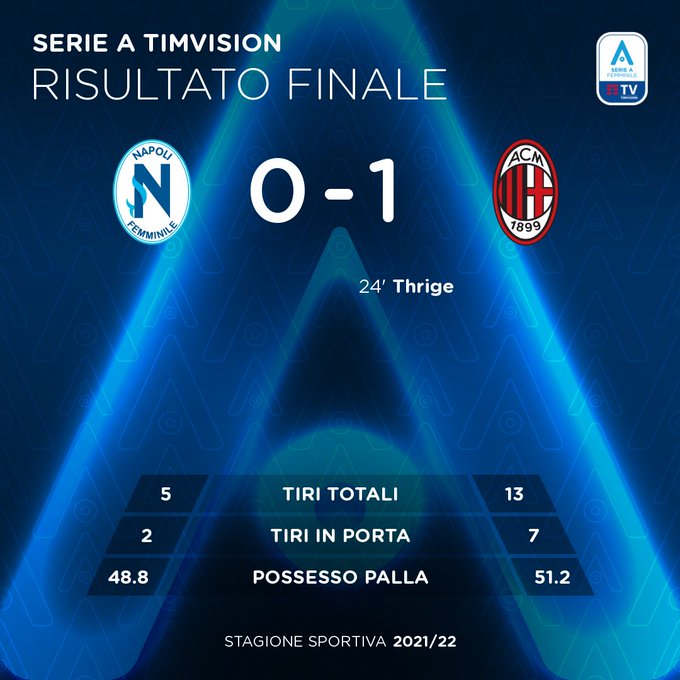 Milan will take on AS Roma next Sunday. The match will take place at 12:30 CET.

The Rossonere will be up against it, as they’ll face a fast and aggressive Roma side. They’ll also have to do so without Laia Codina. A lead-up to the match will be posted soon.

In the meanwhile, you can watch highlights of the game down below. You can also watch a full replay of the match on the team’s Dailymotion page.