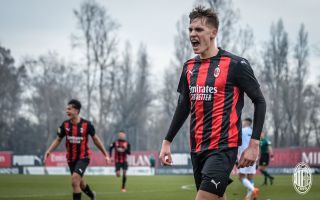 AC Milan are ready to reward Marco Nasti for his performances with the Primavera side in two ways, according to a report.

According to journalist Nicolo Schira on Twitter, there is a double ‘magical moment’ for Marco Nasti. The 18-year-old is all set to be called up for Sunday’s match against Napoli after 5 goals in 9 games for Federico Giunti’s Primavera team this season.

It is also good news for head coach Stefano Pioli who has very little forward depth at the moment, as Rafael Leao, Ante Rebic and Pietro Pellegri are still out with muscle problems while Olivier Giroud could return. Zlatan Ibrahimovic and Daniel Maldini were the only ‘forwards’ named in the squad to face Udinese.

Given their struggles, Nasti has been one of the few bright spots as his goals have kept them in a number of games. His current contract is expiring in 2023 but the renewal of his deal with the Milan until 2025 is also envisaged, Schira adds.

READ MORE: Milan must rediscover their identity against Napoli and wrestle back momentum