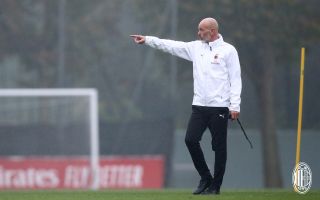 After finishing in second place behind their fierce city rivals Inter last season, fans of Milan will be hoping for another strong campaign in the coming season.

Finishing the best of the rest, in what was indeed an intriguing battle fought out between four clubs until the very last day, their reward was a return finally to the Champions League, which had eluded them for 7 years. With Juventus, the most dominant club in Italy over the last decade, seems to be going through an unstable period, is there potential for AC Milan to finally win another Serie A?

The fans have arguments both for and against these hopes. For sure it was an impressive season but maybe Milan should have done better. The club had a blistering start, with a 15-match unbeaten run and they may not get such a great opportunity again.

Players that leave the club and potential new signings coming in may upset the balance of the side. The proposition of facing a tough game schedule next season may hand them more problems than they have faced before.

The departure of a champion

While all Italians would have cheered on the national team throughout the summer and backers of Italy to win Euro 2020 at sites like casinot online would have been celebrating big wins, AC Milan fans may have wondered if more could have been done to keep hold of star goalkeeper Gianluigi Donnarumma.

Having joined the club at the tender age of 14, he both made his debut and became their regular goalkeeper at only 16. Running down his contract and leaving as a free agent left a bitter taste in some Milan fans’ mouths, but it’s believed his desire to win trophies played a major factor in his decision to leave.

In the end, he decided to move to French giants PSG, resulting in predictions that he will be a star there for many years to come and Milan may yet rue his departure. A heroic performance for his country in the final only drove this feeling home even more.

The long-awaited arrival of Oliver Giroud has finally been completed from Chelsea. This will give Milan some very experienced backup in the case of injuries to other strikers. Despite not getting much game time last season, he may find himself thrown straight into the starting line-up. A link-up with Zlatan sounds mouthwatering, as Giroud is a very unselfish player and would be happy to contribute to Ibrahimovic.

While not exactly a new face, the return of Brahim Diaz on loan from Real Madrid has pleased the Milan fans. He played the bulk of the season, turning out in 27 games and performed well, scoring a few important goals along the way. Still only 21, there is a lot of potential here to take centre stage in the middle of the park for Milan.

The club is crying out for a new leader and he will gain more valuable experience against some tough teams during the coming season.

Unfortunately for Milan, just as they appear to be getting better, so too do their rivals. It’s hard to know if Juventus will perform so poorly again and current champions Inter must now be viewed as a serious threat.

Trying to overcome these two rivals is hard enough, but now other clubs have made gains in their march towards the top of the table. At the end of last season, the four clubs from second to fifth were only separated by a miserly two points.

Napoli and Atalanta made up the rest of that very tight grouping. Napoli, despite always being there or thereabouts, has not managed to win Serie A since 1990 and the famous days when Diego Maradona turned out for the club.

The form of Atalanta is a much more recent phenomenon, having only been promoted to Serie A in 2011. Despite a rocky start, their standard of football has improved much over recent years and as well as finishing in the top three for the last three seasons, their European campaigns have been enjoyed by most neutrals.

Back where they belong

For a club that has won the Champions League an astonishing 7 times, second only to the juggernaut that is Real Madrid who has done so 13 times, not even being involved in the competition for so long has hurt the fans. Seven long years have passed and once again they will get a chance to challenge in Europe’s top competition.

As of yet, no draws have been made so they will have to wait to find out who they will be facing. While the so-called big clubs may provide a threat to their progress, on their day, Milan can be a handful for anyone. Whatever happens, it certainly will be a boost to the club’s finances and it means a lot to the fans.

The first group game will be an eagerly anticipated occasion and the San Siro could be packed to capacity if restrictions are eased. If you fancy them to win the competition, you can have a wager and receive decent odds at a betting site like online kaszinók.

The most important news of all?

Every club has that inspirational player, the solid defender keeping the opposition at bay, the midfielder pulling the strings of attack and in Milan’s case, an outstanding forward that can put other teams to the sword.

Reports that Zlatan Ibrahimovic, their star striker, had decided to extend his stay at the club caused immense excitement amongst the fans. An unpredictable player, yet full of commitment, he puts a certain fear into opponents. His reputation as a goalscorer is well known throughout his long, impressive career.

Missing Euro 2020 through injury, he is sure to be working hard to get back on the field for Milan when the season starts. There is not much to lose by retaining his services and he is very eager to play in the Champions League again.

A lot of big clubs seem to have an outstanding spell and then fade away as a rebuilding process is needed before future success. However, Milan appears to have been left out in the wilderness and despite their impressive history, really seem to have lost their way over the last decade or so.

However, positive signs are there and both the players and fans will be hoping they can build on their impressive showing last season. It would be great to see one of the original footballing giants of Italy and Europe back at the top where they belong.