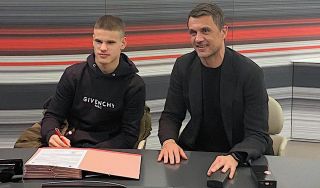 New signing Milos Kerkez has revealed that he supported Juventus as a child, but that is now ‘destined to change’ after his move to AC Milan.

Milan got a deal over the line on deadline day as the 17-year-old defender joined from ETO FC Gyor in Hungary.

NemzetiSport reported that the teenager was wanted by Juve this month but in the end it is the Rossoneri who have won the race for his signature, as a picture with Paolo Maldini and Ricky Massara confirmed.

It appears that Paolo Maldini had a big hand in convincing the player to join, and the player’s agent Daniel Kaposi believes the Milan technical director has big plans for him.

The left-back is short but stocky in stature and appears to possess excellent physicality and dribbling ability. He looks fast and creative, very much like current Rossoneri star Theo Hernandez.

On the website of the Hungarian club, Kerkez made his first statements as a Rossoneri player.

“Yes, I supported Juventus since I was a child but now the situation is destined to change. I hope that Milan will keep the first place in the league,” he said (via PianetaMilan).

“Fortunately, however, I don’t need to change my opinion on Paolo Maldini, I think he was the best left-back ever. And Theo Hernández is one of the excellent players today in that role. It is also interesting to note that Theo is Franco-Spanish, that is, he has a dual citizenship just like me.”

Being a Serbian-Hungarian, which national team would Kerkez choose in the case both wanted him?

“We have already discussed it in the family and our opinion was unanimous, I absolutely want to be a player of the Hungarian national team.”