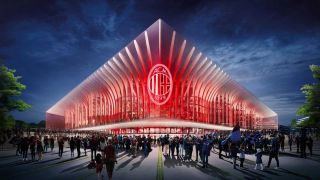 The mayor of Milano, Beppe Sala, has reiterated that the city council are not against a new stadium after positive survey results.

The results were as Milan and Inter hoped: 64 per cent of respondents were in favour of the idea of a new stadium in the San Siro district.

The city mayor Beppe Sala responded to the results: “I saw this survey, according to which 6 out of 10 Milanese are happy with a new stadium.

“On the other hand, we also read a lot of affection from many at San Siro, probably those who have a little more of years he lived many moments of his life in San Siro.

“We are certainly not hostile to a new stadium, we want to understand if in some form the old San Siro can be saved and recovered.

Below is the joint statement by Milan and Inter on the data from the Ipsos survey.

‘According to the survey, 64% of the Milanese interviewed favored the construction of the new San Siro stadium and its multifunctional district in the area where the Meazza is located. 77% of respondents consider the new stadium an opportunity that should be seized, which will bring modernity, jobs and benefits to the City, as already happened in other redevelopments such as Citylife and Porta Nuova.

‘The research also highlights how the Milan of recent years is going in the right direction: the changes that the city has experienced and are experiencing are palpable. Milan is able to compete with the best cities in Europe, but it is not without areas that still need some redevelopment, including San Siro and specifically the area where the Meazza is now located (75% of the respondents).

‘The construction of the new stadium is a well-known topic that citizens have heard extensively about. For continuity and tradition the Milanese claim to prefer the new stadium inserted in the same area where the Meazza now stands. The idea of ​​a stadium outside the confines of Milan, but inside the metropolitan city, is less pleasing, but is nevertheless favourably received. Among the major supporters of the project there are the supporters of the two teams, especially if they are currently subscribers (average score 8.4 / 10) and those who frequent the Meazza with a certain regularity, be it to attend sporting events or musical events. The appreciation of this hypothesis grows after entering into the details of the topic and therefore having provided the citizens with more information at the base of their judgment.

‘The new stadium will certainly be more comfortable and safer than the Meazza (79% of respondents), it will improve the image not only of Milan and Inter, but also that of the city of Milan (71% of respondents) which will thus prove to be in step with the times and able to look at the future of the new generations. It is evident that the citizens of Milan have an affinity with San Siro due to the decades of memories lived in the plant; however, even the nostalgic of the past are supporting a new stadium at San Siro.

‘The projects by Populous (“La Cattedrale”) and Manica / Sportium (“The rings of Milan”) are both liked very much.

‘Although the construction of the new stadium will be entirely financed by Milan and Inter, 63% of Milanese citizens hope that the Municipality of Milan will constantly dialogue with the two companies, also acting as guarantor for the quality of the works that will inevitably have an impact on the city and residents , but that will allow the redevelopment and modernization of an area, as well as the creation of new jobs.

‘The survey was carried out at a random sample representing the population aged 16 and over living in the municipality of Milan according to gender, age, level of education, employment status and area of ​​residence. 2,000 interviews were conducted, conducted by the mixed CATI / CAMI / CAWI method between 10 and 14 October 2019.’