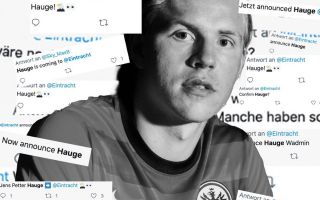 Winger Jens Petter Hauge has been tipped to become a big success in the Bundesliga as he left AC Milan after just one season.

Milan’s management are looking to get the squad completed ahead of the new season – which you can have a punt on via the best sports betting website – and that includes trying to sell players no longer part of their plans for a capital gain where possible.

A statement on the club’s official website this morning has confirmed that a deal for Hauge has gone through as the 21-year-old will join Eintracht Frankfurt, with the formula being an initial season-long loan that would become a permanent purchase upon the occurrence of certain conditions.

MilanNews spoke to Norwegian journalist Elisabeth Knapstad Angioni about Hauge and his transfer to Germany, starting with an assessment on why he did not end up getting much playing time last season.

“We who follow Norwegian players who play around Europe are also wondering what the reason is, and I honestly don’t know. At the beginning as soon as he arrived they had made him play and he had also scored a few goals in the Europa League, but then in the last 9 league games he always remained on the bench, moreover after scoring against Sampdoria,” she said.

“It’s a shame, but I can’t tell you what the main reason for his poor use is. However, it is essential for him to play, as Norway coach Stale Solbakken also said, before the start of the European Championships in the matches in which Hauge was called up. I also know that in a strong team like Milan there is a lot of competition and playing continuously for a young boy of 21 is not an easy thing.”

Did Hauge feel good at Milan or was he too attached to his old club, Bodo/Glimt?

“He, being born and raised in the city of Bodo, is very attached to that team and that city. Despite this, he was delighted to be at Milan and is grateful to the club for the opportunity that was given to him. He is very young, he would have liked to play more, but nevertheless he understands that the competition for a place in the team is very high in the Rossoneri.

“After being left out in the last 9 games, he too understood that it was better to look for another club. In any case, it is a great honor for Hauge to have been bought by Milan because in this way he has reached a level in European football that he could only dream of before.”

Was his season at Milan positive for you or not? He amassed 24 appearances and scored five goals.

“I would give him a positive vote, he is young, but having played so little, perhaps his qualities have not been seen which I think he has. He has potential and I hope he can blossom in Germany. Among other things, this Saturday, Hauge could face the other Norwegian, Erling Haaland, in the Bundesliga, given that there is Borussia Dortmund-Eintracht Frankfurt. We’ll see if he will be called-up.”

Will he be able to establish himself in the German league?

“I think so. The management of the Frankfurt club said they want to strengthen the team with young, aggressive and prospective players. Hauge has everything it takes to do well in Germany. Since Haaland plays in the Bundesliga, the Germans have begun to have a high regard for Norwegian players, we hope they do so with Hauge too.”

As a last question, was there a poor feeling between the Milan coach, Stefano Pioli, and Hauge?

“I can’t evaluate this because I don’t have the right information, but it might as well be. He is young, he comes from a Norwegian village of 50,000 inhabitants and probably has not been able to impose himself on Milan. Maybe the language also influenced, although I know that Zlatan Ibrahimovic helped him translate as Norwegian and Swedish are similar as languages. To establish himself properly, he needs to play and experience, since he is a rather shy boy anyway.”