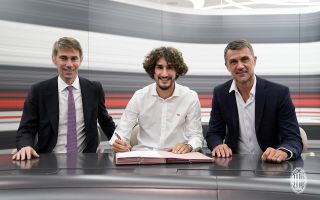 AC Milan have announced the signing of Yacine Adli from Bordeaux, which was completed before the Italian transfer window closed at 8 pm this evening. And as had been reported, he will be loaned back.

The midfielder, who turned 21 last month, has signed a five-year contract with the Rossoneri. An agreement was reached with Bordeaux at €8m as it was agreed that Adli would be sent back to the French side on loan for this season.

A statement on the club’s official website reads as follows: “AC Milan is delighted to announce the signing of Yacine Adli from FC Girondins de Bordeaux on a permanent basis. The footballer has signed a contract with the Rossoneri Club until 30 June 2026. Adli will stay at the French club on loan for one year.”

Born in Vitry-sur-Seine (France) on 29 July 2000, Adli spent his youth career at Paris Saint-Germain, making his first team debut in 2018. In January 2019, he moved to Bordeaux, where he scored five goals in 72 appearances.

Adli will continue his development at Bordeaux and will hopefully be an even stronger player come next season. Only then will Milan know if they made the right decision to pull the trigger on the midfielder.

Just a few minutes ago, the signing of Junior Messias from Crotone was also announced by Milan, who know how completed their mercato. We can only hope that their efforts were enough this summer, but optimism is filtering.