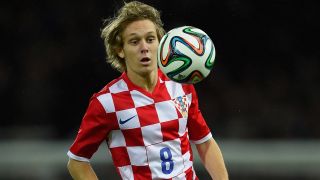 Official: AC Milan announce they have terminated the contract of Alen Halilovic

AC Milan have officially confirmed that winger Alen Halilovic has had his contract terminated by mutual consent, ending his two-year stay at Milan.

Formerly of Barcelona, the Croatia international arrived at the Rossoneri on a free transfer two summers ago but made just three appearances in his first season – all coming in the Europa League.

The 23-year-old was then sent to Standard Liege on an 18-month loan in January, but that loan spell was cut short and he then joined Eredivisie side Heerenveen on loan, where he has returned after a season with one goal and one assists in 17 league appearances.

He reported for preseason earlier this summer leading to suggestions that he would be considered as an option by head coach Stefano Pioli, however after 25 difficult months as a Milan player the club have confirmed that he has been let go.

“AC Milan announces the termination by mutual consent of the contract with Alen Halilović. The Club wishes the footballer every success in his future career.”