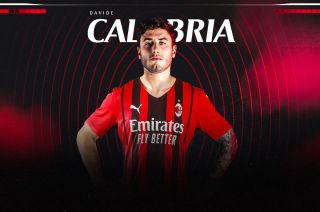 AC Milan have announced yet another completed operation as Davide Calabria has put pen to paper on a new contract.

A statement on the club’s official website reads that Milan are delighted to announce the contract extension of Calabria until June 30th 2025, with his previous deal set to expire in 2022. The 24-year-old has been with the Rossoneri since the age of 10 and made his Serie A debut all the way back in May 2015, making him the longest tenured player in the current squad.

He has scored 5 goals in 151 appearances for the first team, and he will continue with his boyhood club and extend his 15-year tenure. Calabria was one of the success stories from last season as he put a difficult 2019-20 campaign behind him, recovering his form and hitting good levels again, making the right-back role his own.

Gianluca Di Marzio spoke to Sky Italia (via MilanLive) to give the latest on the Milan mercato and confirmed the earlier indiscretions that Calabria will extend his deal until 2025 for €2m net per season plus bonuses.

READ MORE: Milan unwilling to pay €15m for Chelsea midfielder – other formulas to be explored