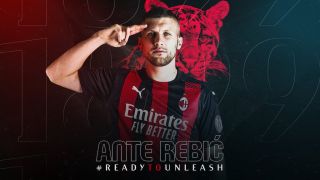 AC Milan have confirmed that they have secured the permanent signing of winger Ante Rebic from Eintracht Frankfurt.

A statement on the club’s website confirmed that the Rossoneri have indeed converted Rebic’s two-year loan spell (of which he was entering his final year) into a permanent stay at San Siro.

The Croatian forward has put pen to paper on a contract which will run until June 2025, meaning he has essentially signed a brand new five-year deal.

Rebic continues his Rossoneri journey after scoring 12 goals in 30 appearances during the 2019-20 campaign, one which he finished as the team’s top scorer.

Milan have also confirmed Sky Italia’s report in stating that the former Fiorentina forward will switch number too, choosing the number 12 shirt having worn 18 previously.

Meanwhile, Eintracht’s statement confirms that both clubs have agreed not to disclose the economic terms of the agreement, i.e. how much Milan paid for the 26-year-old.