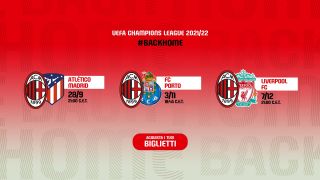 The club website confirms that – starting from tomorrow – ticket sales will resume for AC Milan vs. Atletico Madrid and prices have been updated after initial controversy, with tickets starting from €39 for 2019-20 season ticket holders.

The ticket prices for the group stages of the Champions League for the upcoming season were an issue that rather surprisingly divided large sections of the fan base and ultimately caused a re-evaluation from CEO Ivan Gazidis.

❗ OFFICIAL: The new ticket prices for #ACMilan's Champions League home games are out!