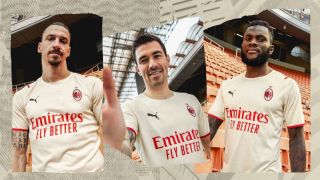 AC Milan have launched their new away kit for the 2021-22 season in conjunction with manufacturer PUMA, featuring a ‘gold’ base colour.

As per a statement from the club, the special new golden kit celebrates the work of Fondazione Milan – Milan’s charity – with the words “Fondazione Milan” printed under the collar on the back of the shirt.

The new away jersey also features a striking all-over pattern inspired by six cities across the world involved in a charitable initiative that will officially launch in September.

The “From Milan to the World” initiative, created by AC Milan’s Fondazione Milan, in partnership with PUMA, will give Rossoneri fans across the world the chance to vote to support a socio-educational project out of six proposals that will be presented in September, alongside local and international non-profit organisations. The end result will be the development of the selected program, linked to one of the six cities chosen for the initiative: New York (USA), Rio de Janeiro (Brazil), Kolkata (India), Melbourne (Australia), Nairobi (Kenya) and Milan (Italy).

The new AC Milan Away jersey combines 100% recycled polyester with advanced PUMA dryCELL thermoregulation technology, plus an Ultra-light jacquard structure into the back of the jersey to enhance breathability during intense performance.

The new kit will be available from July 21st at PUMA.com, PUMA stores, AC Milan official stores, store.milan.com and at select retailers worldwide.

🗣 "The special new golden kit celebrates the work of Fondazione Milan, AC Milan’s charity, with the words 'Fondazione Milan' printed under the collar on the back of the shirt."

🤔 How would you rate it out of 10? pic.twitter.com/6eDt2wsndZ