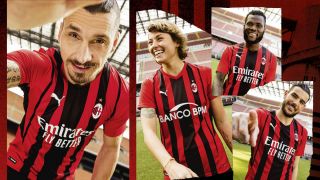 Official: AC Milan unveil 2021-22 home shirt – ‘Move Like Milan’ and the inspiration behind it

AC Milan have officially unveiled their home shirt for the 2021-22 season via a launch video with the tagline ‘Move Like Milan’.

As per a statement on the club’s official website, the new shirt ‘takes inspiration from the energy, creativity and style of Milan’ and the ‘Move Like Milan’ slogan reflected the rapid acceleration of the city’s culture as Milan reinvents itself.

The shirt features Milan’s iconic red and black stripes but at various widths, which is apparently to celebrate ‘the creative balance of tradition and modernity giving rise to a new Milan, from the pitch to the streets to the city skyline’.

Giacinti said: “I’m really excited to be wearing this kit on the pitch for the first time in our next game. I love the design, modern yet traditional, and how it has been influenced by the city of Milan.”

Romagnoli added: “Wearing the red and black colours day in and day out gives me immense pride. The new kit looks really modern, and you can truly see where the inspiration for the stripes comes from – it is a great representation of Milan’s new and expanding skyline.”

🤔 Thoughts on the kit? Where does it rank among our recent home shirts?

🗣 Tell us your thoughts 👇 pic.twitter.com/YKaIxCfVhL