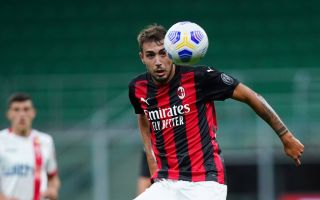 Official: Alessandria announce signing of Milan youngster on loan with option to buy

Milan aren’t just looking for new signings, they are also offloading a few players. Gabriel Bellodi, the academy product, is the most recent one as the Rossoneri have sent him to Serie C on a two-year loan.

The transfer was announced by Alessandria earlier today on their official website, confirming that there is a buy-out option included. Milan also included a buy-back clause as they still feel the 20-year-old has potential.

“Defender Gabriele Bellodi is a new player of Alessandria. Bellodi, just turned twenty, grew up in Milan, a club from which he arrives with the formula of a two-year loan with the option of Alexandria and counter-option of the Rossoneri,” the statement read.

Bellodi made just two appearances last season with Crotone, who earned promotion to the top flight. The year before, he played 30 games for Olbia in Serie C, meaning last season didn’t exactly go as planned for the youngster.

He made a few appearances during Milan’s pre-season and did relatively well, attracting the interest of several clubs. Hopefully, he will be able to continue his growth with his new club and convince the Rossoneri to buy him back.

READ MORE – Saelemaekers heaps praise on Ibrahimovic: “Playing without him is another thing entirely”

Montolivo praises Milan for not handling Kessie like ‘what happened to me’
22 October 2021, 21:00
Serie A Standings