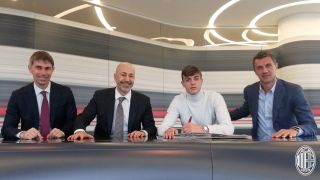 The Maldini dynasty at AC Milan looks set to continue for another five years at least as Daniel has committed his long-term future to the club.

The Italy U19 international has been in impressive form for the Primavera this season so far, and has put pen to paper on a contract running until 2024.

From father to son: #MilanPrimavera's Daniel Maldini has extended his contract with the club until 30 June 2024.