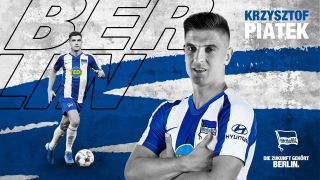 The Poland international was linked with a number of different Premier League sides having fallen out of favour under Rossoneri head coach Stefano Pioli, who prefers using a strike partnership of Rafael Leao and Zlatan Ibrahimovic.

The Times are reporting United ‘were close to a deal’ for the 24-year-old which would have seen him join for 18 months loan before completing a permanent move in 2021.

Meanwhile La Gazzetta dello Sport’s Nicolo Schira reported that Piatek’s agent has offered the striker to Chelsea, and that Spurs were also interested confirming that contacts are ongoing between Tottenham and Milan.

However, it is the German capital club who have won the race, and they announced the capture of Piatek in a statement on their official website.

‘Shortly before the end of the current transfer window, Hertha BSC became active again on the transfer market and signed the Polish international Krzysztof Piatek on a long-term contract,’ it reads.

‘The 24-year-old centre-forward moves from the historic Italian club AC Milan and is given number 7.’

Milan also issued the following statement: ‘AC Milan announces that it has definitively sold the sports performance rights of the player Krzysztof Piątek to the German club Hertha BSC .

‘The Club wishes to thank the player for the professionalism he has always shown in wearing the AC Milan shirt and wishes him the best sporting and personal satisfaction.’

Piatek reacted after sealing the move: “I am very happy that this transfer worked out.

“I feel great desire to help the club together with my new teammates and to climb up a few places in the table as quickly as possible.”

Managing Director Sport Michael Preetz had his say on the signing, which cost Hertha anywhere between €22-27m – depending on which reports you believe.

“With Krzysztof we have a highly talented attacker who is impressive at the highest level of his goalscoring and attacking quality, both in Serie A and in the national team,” Preetz said.

“Through him, we now have even more quality in our attack. I am sure that he will help us a lot in the further development of Hertha BSC.”