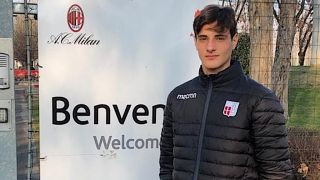 The Rimini-born teenager played at Santarcangelo Giovanili until 2018 when he joined the youth team at his hometown club.

It is Gianluca Di Marzio that has confirmed the Rossoneri’s acquisition, and Angelini has already made his first-team debut during a Coppa Italia match, playing 45 minutes against Vis Pesaro.

He is an investment by Milan for the future and his agent Claudio Peverani helped get the deal over the line. Predominantly an out-and-out central midfielder, Angelini will join the Primavera setup immediately.

The overhaul of the club’s youth system has continued from the summer after a disastrous campaign in which they were relegated from the top flight last season.

This time around however they are on their way back up under coach Giunti, currently sat atop the Primavera B table having won 10 in a row in the league.